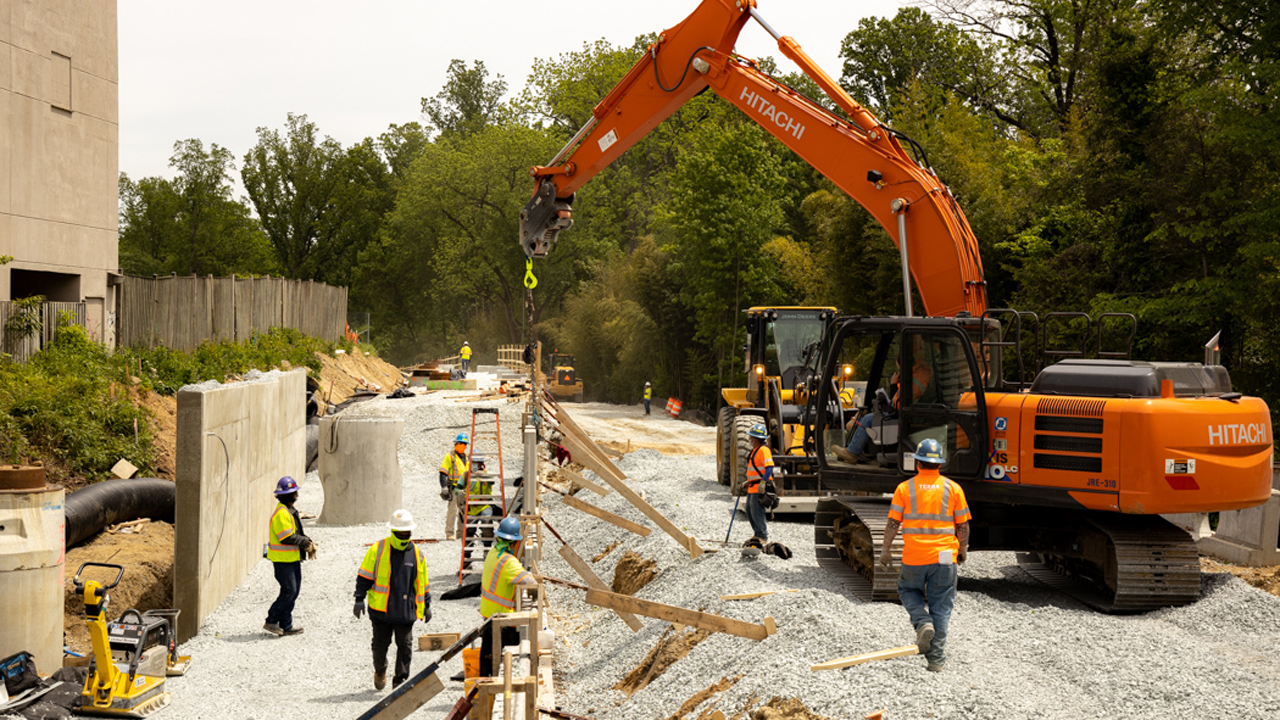 A team of design-build contractors has been selected for the long-delayed Purple Line light rail project in Maryland. Construction is expected to begin this spring with service beginning in fall 2026. (Pictured: Purple Line construction work in Bethesda.)

Maryland’s long-delayed Purple Line is back on track with the approval of a new design-build team, Maryland Transit Solutions, in a $3.4 billion contract; the total cost of the project is now estimated at $9.284 billion.

the Maryland Department of Transportation (MDOT) made the announcement Jan. 26 and said full-scale construction will begin this spring on the 16.2-mile, 21-station light rail project that began in 2017. The Purple Line, which has been in disputed and was originally scheduled to open in March, is expected to begin carrying passengers between Bethesda and New Carrollton in the fall of 2026. (See revised project schedule below.)

The move follows a $250 million settlement MDOT reached in November 2020 with the three PLTP-related companies. The dispute centered on delays and cost overruns of $800 million. While Fluor left PLTP, developers and financial partners Meridiam and Star America remained.

Since September 2020, MDOT MTA has managed over 150 Purple Line contracts and has overseen several key milestones which it says will “benefit the construction of the project, significantly reducing risk to the new design-build contractor.” This work has advanced the design components; secured stormwater permits; and completed numerous outstanding utility moves, with approximately 66% of all project utility moves now complete.

While Maryland Transit Solutions will take on most of the Purple Line’s more than 150 contracts, the Maryland Board of Public Works also on January 26 approved five new MDOT MTA contracts totaling $15.4 million to enable current unfinished work, including including moving utilities, concrete and other construction. work to be completed. In addition, the Board approved a 48-month, $15 million contract amendment for ongoing technical oversight of design and construction by the general engineering consultant.

The price of the now amended PPP deal is $9.284 billion, up 66% from the 2016 estimate of $5.59 billion (see chart below). It covers payment to Maryland Transit Solutions for design-build work (at a 70% higher cost, MDOT reported, due to the “post-pandemic market,” with material shortages, labor reduced work and increases in the insurance market, among other factors); to the Purple Line transit operators for 30 years of operating and maintaining the line; to PLTP for management oversight of all Purple Line elements for the life of the project; and to MDOT for debt and equity repayment.

“The PLTP will fund the incremental cost of the project through a combination of debt and equity that will be repaid through availability payments made by the state,” MDOT reported. “PLTP also agreed to reduce its rate of return – essentially what it gets back on the project – by 20%. The P3 agreement includes operational and performance goals that must be met by partners in order to receive full availability payments.

The amendment to the P3 agreement “also shortens, clarifies and streamlines the dispute resolution process between the parties,” MDOT said. “Separate and distinct from the dispute resolution process, the P3 agreement has also been amended to remove the right to unconditionally terminate the P3 agreement for an extended period (used by the former design-build contractor as a basis for leaving the project).The right of conditional termination for prolonged delay has also been restricted.The contractor may conditionally elect to terminate the contract in the event of a prolonged event of “force majeure” beyond the control of either either of the parties, such as war, act of terrorism, fire and flood, but this is not a unilateral right and the owner can choose to continue in this case.

“Despite the challenges of the past several years, we have never lost sight of the benefits of the Purple Line for residents and businesses in the National Capital Region,” said Holly Arnold, Administrator of the MDOT MTA. “Today [Jan. 26] The action is the critical step needed to move the Purple Line from construction to an active light rail line that creates a truly interconnected regional transportation system. We wouldn’t be here today without the true partnership with Purple Line Transit Partners and the support of our county, state and federal partners to get this project built.

“Since we and MDOT MTA selected Maryland Transit Solutions as providing the best value to Marylanders, we have worked closely with MTS to help them get started,” said Jane Garvey, Chair of the Board of PLTP. . “We are very pleased to resume major construction work so that the Purple Line can begin serving Maryland travelers as soon as possible.”

CAF USA is continuing its work on the 28 LRVs that will run on the Purple Line. According to MDOT, eight are complete and available for shipment from CAF’s facility in Elmira, NY; eight more are complete and undergoing static testing; and eight more are being assembled. In the fall of 2023, vehicles are expected to begin arriving at the Glenridge operations and maintenance facility in Prince George’s County, and in the summer of 2024 the test track is expected to be completed for local testing and operator training.

“By winter 2025, construction should have progressed sufficiently to allow system-wide testing, and commissioning activities will continue,” MDOT reported.

Is the provision of a debt guarantee a “free transfer of ownership”?