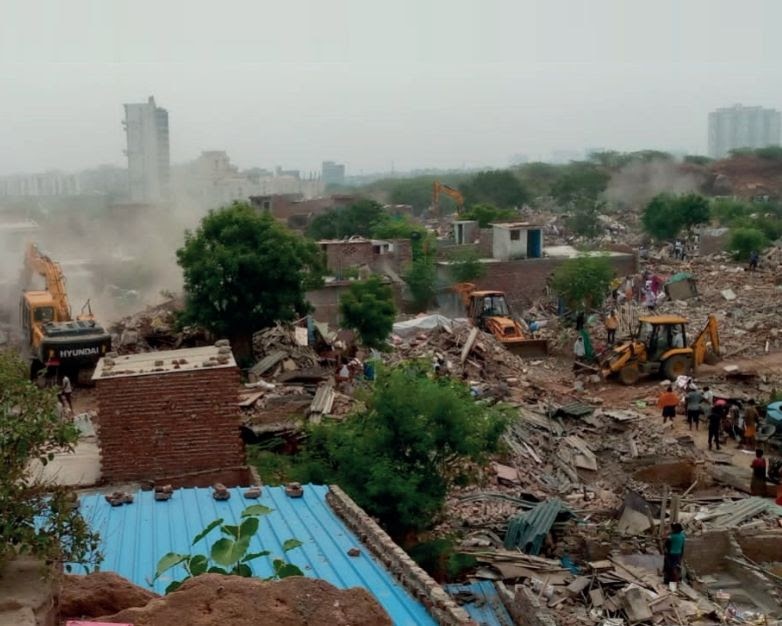 Why are high-end hotels, farms not treated the same as Khorigaon?

By our representative
A public hearing, sponsored by the civil rights group National Alliance of People’s Movements (NAPM) to hear from concerned citizens of Khorigaon, off Faridabad, Delhi NCR, saw residents complaining about the demolition of their homes while even that the whole area was converted. in a prison through an intensive police deployment.
Rekha, a social worker, living in Khori Gaon, with Sitara Begum, Shabra, Nirmala Devi, Nazima, Anu Verma, Sameena, Razia, Manorma Gupta and Shiraz Mithun pointed out that their electricity and water supplies were cut off, mobile phone broken towers and limited internet access. They pointed out that people bought this land by selling their village land or by taking out loans. They were therefore not invaders.
Those who spoke were beaten, arrested and jailed by police, they said. While the government made temporary arrangements for stay and food after a day for residents of Radha Swamy Satsang, they complained that the location is very far from the demolition site and there was not enough space where they could have food. Worse yet, the authorities did not even allow people to bring food for their families.
Those who heard the public hearing as a jury included environmentalists Ashish Kothari and Claude Alvares, social activist Anjali Bhardwaj, lawyer Tripti Poddar, housing rights activist and academics Prof Amita Bhide of the Tata Institute of Social Sciences (TISS), Mumbai and Prof Bittu KR from Ashoka University, Sonipat.
Residents have complained, as part of the rehabilitation plan for economically weaker sections (EWS) announced by the government of Haryana, residents of Khorigaon are being asked to pay an impossible rent deposit of Rs 17,000 for their rehabilitation. in Dabua. They asked, if the government destroyed our homes, what we paid for, why should we pay for the rehab apartments?
They asked themselves: are we the ones who should be punished? Not the ones who put us here? Not the governments that knew what was going on here? What happened to the slogans Jahan Jhuggi Wahi Makan, Beti Bachao Beti Padhao and instructions to maintain social distancing? Do people know we are here? Do they see us as Indian citizens? Did the Supreme Court really give such orders to treat us in such an inhumane way, without food, water and homes?
Ishita Chatterjee, a doctoral student at the University of Melbourne, said there was no proper demarcation between Delhi and the Haryana border and that the ground mafia and government officials had exploited this confusion. Even after the trials began in 2012, people continued to receive false promises from government officials and politicians that they would not be deported. Most of the residents of the new part of Khorigaon have documents from Delhi and get their basic facilities in Delhi.
Thus, the majority of them will be ineligible for the rehabilitation plan announced by the government. She added that with Khorigaon, many high-end developments are on forest land in accordance with the Punjab Land Preservation Act (PLPA).

However, they were not called forest invaders. She also pointed out that this area ceased to be a forest when mining was allowed here from the 1950s. The idea of ​​a forest only exists in the government’s imagination and on paper, but on the ground, there is no forest.
Dr Manju Menon, working at the Center for Policy Research (CPR), said the Punjab Land Preservation Act (PLPA) is a colonial law that was used to regulate land use in certain areas in order to protect soil and water. In 2004, the Supreme Court ruled that the PLPA land would be considered a “deemed forest” and that construction activities would be illegal unless approved. Based on this order, the Haryana Forest Department issued an eviction notice in 2005. It was the beginning of the designation of the people of Khorigaon as “forest invaders”.
There are many illegal elite constructions on PLPA lands in Haryana, and the forestry department has a long list of them which was prepared in 2020. However, although these elite violations do not have not been affected, the Haryana government is relocating the population of Khorigaon to reclaim a relatively small area of ​​forest land at a very high human cost.
Neelesh Kumar from Basti Suraksha Manch informed the panel that Khorigaon had become a prison for residents after the Supreme Court order of June 7, 2021. There were police all around, and they were constantly threatening residents. People’s water, electricity and other facilities were shut down. Police regularly organized marches in the streets of Khori Gaon. Anyone who raised their voice or whenever groups attempted to assemble were put in jail. Journalists have been threatened on several occasions.
Whenever people tried to organize a demonstration, processions and demonstrations, they were prevented from assembling or even leaving the basti. When resorting to lathi-charge, many residents and activists were injured. Due to impotence, many people have committed suicide. The demolition by bulldozers and JCB machines began on July 14. In the rain and the scorching sun, people’s homes, temples, mosques, churches were demolished on the basis of a resettlement policy on paper without carrying out any field investigation.
Newsclick’s Sumedha Pal informed the jury that even journalists were threatened and suffered police brutality. They were asked to give their written consent that they are responsible if the police do anything with them before reporting. Even seasoned journalists were treated the same. She ended by stressing that the state of press freedom in India has become deplorable and dangerous.
The NAPM in a memo said: “The people’s presentations highlighted the reality of exploitation by the land mafia and government agencies. The Apex Court also ignored the Covid situation and did not provide any alternative rehabilitation. effective and timely The right to shelter, water, food is covered by basic human rights, and all citizens have the right to demand these rights from the state. Temporary shelter should have been be immediately given to the displaced with written assurance for proper rehabilitation. “

At the end of the public hearing, each of the jurors made several observations.
Social activist Anjali Bhardwaj: Even though the court ordered the eviction, this type of violence is unacceptable in any civilized society, this too during Covid and without rehabilitation, camp, livelihood and media are prohibited from covering it. The governments of Delhi and Haryana are responsible and we must hold them accountable.
Environmentalist Claude Alvares: How can the Supreme Court support all of this? The SC command should not be misused in this way. This type of violence took place during the emergency period in 1975-76. We have retreated as a nation on the human rights front.
Professor Amita Bhide: Violence, brutality and land policy must be fought and protested. The first goal of the SDGs is to leave no one behind, but the government is determined to push the poor into a deep pit. Residents do not beg for housing; they worked, struggled to build their houses which were then demolished. Housing is their right. We must demand compensation and rehabilitation, bearing in mind the four issues of land, violence, development and housing.
Prof. Bittu KR: I salute the strength of the people of Khorigaon. What we have seen is a repetition of the same pattern of faulty and inadequate settlement, displacement and rehabilitation. It is the responsibility of the government to provide houses for the people. But they forgot about it, and now people have to fight for their basic rights.
Avocado Tripti Poddar: I am ashamed to hear what is happening in a democratic country. There is a lot of confusion regarding the responsibility and policies of the governments of Haryana and Delhi. The Supreme Court must be informed of how their orders are executed on the ground with brutality and violence. Those who sold these plots, including government officials who accepted bribes, must be held accountable.
Environmentalist Ashish Kothari: This case follows a trend across India of people becoming “illegal occupants” of land through post-facto changes in land use designations. There is flagrant inequality of treatment between the inhabitants of Khori gaon and other high-end professions. If reclaiming and re-greening the Aravalli is the goal, why only remove Khorigaon?

Report on the demolition campaign

A report prepared on the public hearing regretted that the Supreme Court concluded that this basti is an encroachment on the forest lands of Aravalli and therefore saw fit to order the municipality of Faridabad to carry out evictions by force. if necessary and not to use the Covid. pandemic as a pretext to delay demolitions.

Demolitions have continued uninterrupted since July 14. The monsoon has arrived, and we are still in a pandemic where most of the population is not vaccinated. The Haryana was in partial containment until June 21, 2021. Thus, we have all the ingredients for a huge human rights disaster, which could easily be avoided, he insisted.

The report, which provides the historical context of the colony, details of legal cases and Supreme Court orders, a description of the multiple demolitions that have taken place, their impact on the inhabitants of the colony and human rights violations. that have emerged.

The main recommendations of the report are as follows: