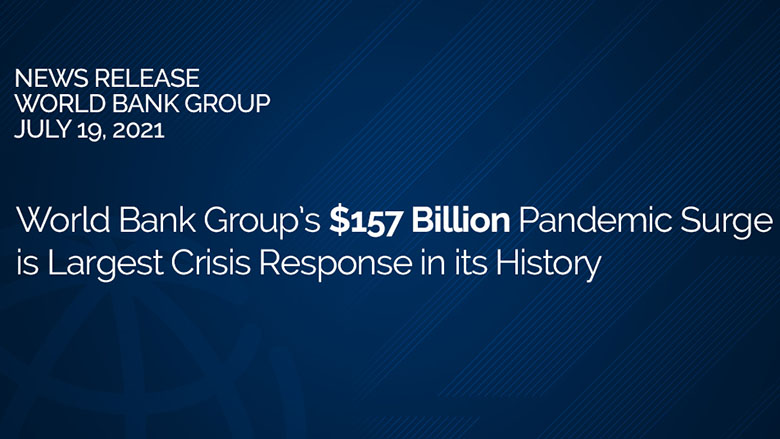 WASHINGTON, July 19, 2021 – In response to COVID-19 which has severely damaged the lives and livelihoods of millions of people in developing countries, the World Bank Group has deployed more than $157 billion to combat the health, economic and and social impacts of the pandemic over the past 15 months (April 1, 2020 – June 30, 2021). This is the largest crisis response of such a period in the history of the Bank Group and represents an increase of more than 60% compared to the 15-month period preceding the pandemic. The Bank Group’s commitments and mobilizations in fiscal year 2021 (FY21) alone (July 1, 2020 – June 30, 2021) amounted to nearly $110 billion (or $84 billion excluding mobilization, financing short-term and beneficiary-executed trust funds).

Since the onset of the pandemic, the Bank Group has helped countries address the health emergency, strengthen health systems, protect the poor and vulnerable, support businesses, create jobs and relaunch a green, resilient and inclusive recovery.

After last year’s COVID-related economic deterioration, the global economy is expected to grow by 5.6% in 2021. The recovery so far has been uneven and many of the world’s poorest countries are being left behind . While around 90% of advanced economies are expected to return to their pre-pandemic per capita income levels by 2022, only around a third of emerging and developing economies are expected to do the same. In 2020, extreme poverty around the world increased for the first time in more than 20 years, with nearly 100 million people pushed into extreme poverty.

“Since the start of the pandemic, the World Bank Group has committed or mobilized a record $157 billion in new financing, an unprecedented level of support for an unprecedented crisis,” noted World Bank Group President David Malpass. “We will continue to provide essential assistance to developing countries during this ongoing pandemic to help achieve broader economic recovery. The Bank Group has proven to be a fast, innovative and effective platform to support developing countries in their response to the pandemic and build their resilience to future shocks. But we must do more. I remain deeply concerned about the limited availability of vaccines for developing countries, which are essential to save lives and livelihoods. »

During the 15-month period ending June 30, 2021, the Bank Group stretched its balance sheets, accelerated leverage and disbursements, and frontloaded its resources. Support to the countries of the International Bank for Reconstruction and Development (IBRD) amounted to $45.6 billion – including the drawdown from the IBRD’s $10 billion crisis buffer in addition to Board-approved sustainable annual lending limits. Grants and loans at zero or low interest rates to the world’s poorest countries International Development Association (IDA) was $53.3 billion. To meet growing financing needs, the World Bank fully utilized all remaining IDA18 resources in FY20 and preloaded about half of the three-year envelope of IDA19 resources in FY21. In February 2021, IDA donor and borrower country representatives agreed to advance IDA20 by 12 months to allow for continued peak funding in future years.

Moreover, during the same 15 months, the International Finance Corporation (IFC), the private sector development arm of the Bank Group, reached a record level of $42.7 billion in financing, including short-term financing ($10.4 billion) and mobilization ($14.9 billion), of which 37% in low-income and fragile and fragile countries. States affected by conflict. IFC provided liquidity to businesses to keep them in business, while increasing investment in businesses on the front lines of the pandemic response. To address the COVID-induced increase in the trade deficit, IFC has expanded its trade and supply chain finance activities. IFC’s “upstream” work continues to create the conditions to attract much-needed private investment to some of the world’s toughest places and set the stage for a faster private sector recovery.

Despite a tough year for borrowers and financial markets, IDA doubled the amount it raised last year from investors, reaching nearly $10 billion. IBRD has raised $68 billion by mobilizing financing from investors around the world. IBRD and IDA, both rated AAA/Aaa, have raised awareness on a variety of development themes to successfully mobilize financing for sustainable development. The year also featured innovations such as a five-year, $100 million one-time bond issued by IBRD to support the global response to COVID-19 through UNICEF. IFC, also rated AAA/Aaa, has issued nearly $13 billion in bonds for private sector development and job creation in emerging markets.

the Multilateral Investment Guarantee Agency (MIGA), whose mandate is to generate impactful foreign direct investment in developing countries, issued $7.6 billion in new guarantees in the same 15-month period since the start of the pandemic, 19% of which backed projects in IDA countries and fragile settings.