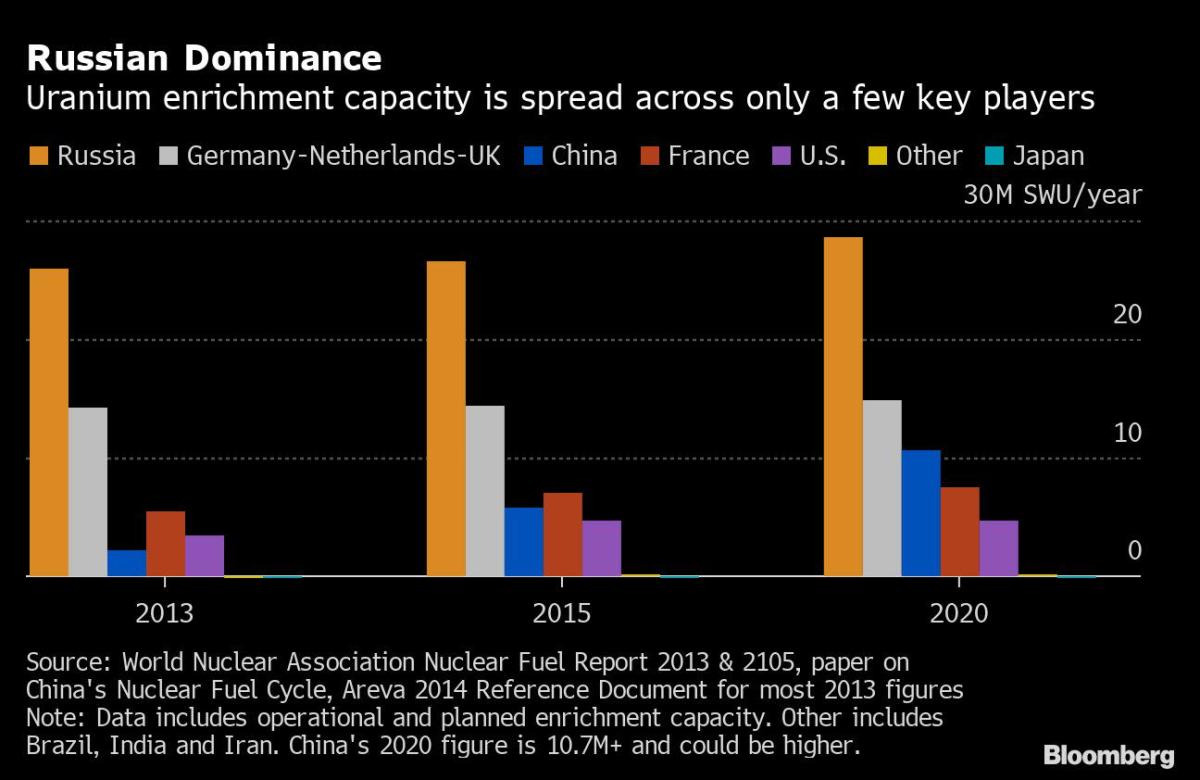 (Bloomberg) – As economic sanctions pile up on Russia, there are growing concerns that export restrictions from the world’s top supplier of nuclear fuel have the potential to disrupt the U.S. electric industry.

Russia produces about 35% of the world’s enriched uranium for reactors, about twice as much as the second-largest supplier, and supplies about 20% to US industry, according to UxC LLC, a nuclear industry researcher.

“If enrichment is reduced or supply from Russia is reduced, it will have an immediate impact on the market,” said Jonathan Hinze, president of UxC. “Because the West and countries like Japan, Korea, Taiwan and others don’t have their own enriched uranium, we around the world rely heavily on Russian enrichment.

The United States and its allies are still weighing options and may exempt certain energy sources like uranium and oil from sanctions. Despite European restrictions on Russian air traffic, Hinze said a plane was cleared to deliver a shipment of manufactured uranium pellets to Slovakia on Wednesday.

The Nuclear Energy Institute, a Washington-based trade group that represents reactor operators, said it was monitoring the situation and was not yet aware of any disruptions. US utilities contract with a global network of companies and countries to mitigate disruption risks, Nima Ashkeboussi, the group’s senior director of fuel and radiation safety, said in an email.

Constellation Energy Group Inc., the largest U.S. nuclear operator, said utilities typically purchase fuel years in advance and maintain large inventories that would limit the short-term effects of sanctions. The company is “well positioned to weather any potential supply disruptions,” said Paul Adams, a spokesman for the company which spun off from Exelon Corp last month, in an email.

“The reactors’ ability to operate for 18 to 24 months after being refueled further insulates these plants from any immediate impact on operations,” he said.

While contracts for nuclear fuel are booked years in advance, the material itself is shipped once or twice a year, according to Hinze. Meanwhile, Russian suppliers of uranium, a key ingredient in nuclear fuel, have turned away, said Mark Chalmers, CEO of Energy Fuels Inc., a uranium miner based in Lakewood, Colorado.

“They’re in real trouble,” Chalmers said. “There is certainly a renewed interest in contracts with non-Russian suppliers.”

‘I don’t know how to give up:’ Soul-filled restoration, other black businesses navigate tough pandemic