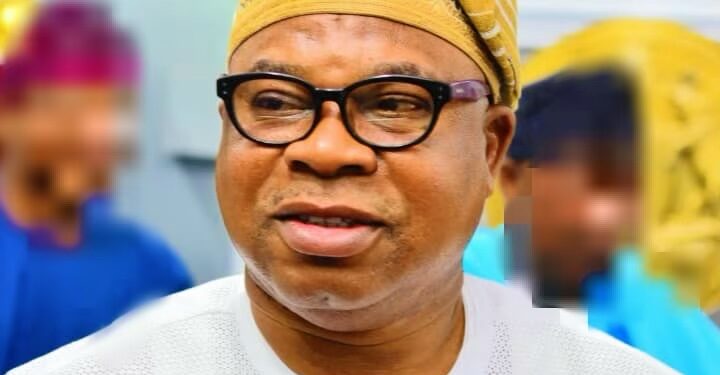 Osun did not receive N48b reimbursement on roads – Finance Commissioner

Contrary to a claim by a former Osun State Internal Affairs Commissioner, Mr. Sikiru Ayedun, the state government noted that the administration of Governor Adegboyega Oyetola did not receive the sum of N48b from the federal government as reimbursement on federal roads built in the state.

State Finance Commissioner Bola Oyebamiji, who made the clarification in a statement on Saturday, described Ayedun’s claim as false, misleading and capable of creating discord, conflict and animosity within the progressive family.

According to him, the total reimbursement by the FG to the state to date, in three installments, amounts to 11.9 billion naira based on the project delivered by the contractors.

Oyebamiji urged well-meaning Osun citizens to endeavor to verify all information before it is published and released to ensure a peaceful and healthy political atmosphere for all.

“The projects in question, in November 2018, on average, were less than 35% complete. The available records show that the Osun State government awarded the 29 km Gbongan – Akoda dualisation project in 2013 for 29 billion naira while the 40 km limit Osogbo – Ikirun – Ila Odo Kwara was awarded. for 17.5 billion naira in the same year, bringing the two projects to 46.5 billion naira. as proposed by the Osun State Government.

“However, after due diligence and a thorough evaluation by FG’s Public Procurement Agency, the contract amount was revised downward as follows: All FG roads under construction. This review was duly communicated to the government of Osun State.

“In November 2018, the contractor in charge of the Gbongan – Akoda road project had received a total sum of 10.2 billion naira, of which 3.5 km of the 29 km stretched road were completed, including the Gbongan interchange. and the project was 29% complete, while the contractor in charge of the Osogbo – Ila Odo road raised a total of 9.2 billion naira, with a completion rate of 49%.

“The implication is that the Osun State government paid the two entrepreneurs the sum of N19.4 billion in November 2018. Likewise, the total reimbursement by the FG to the State to date, in three installments, amounted to 11.9 billion naira on the basis of the project delivered by the two contractors.

“It is imperative to state that the FG repayment of 11.9 billion naira was judiciously used and reinvested in four (4) legacy road projects undertaken by the previous administration, contrary to Mr. Ayedun’s unsubstantiated claims that the refund is used. pay the full salaries of civil servants.

“To date, the Gbongan – Akoda road project is at 36% completion, with 8.6 km paved on both sides of the road. Also, the Osogbo – Ila-Odo project which was at 49% in November 2018 is now 55% complete. The Oba Adesoji Aderemi road which was also inherited at 65% completion is now at 74% and the Ilesa – Iperindo – Ipetu Ijesa road project has increased from 40% to 66% completion.

“It is also instructive to note that since the advent of the Oyetola administration, an additional 60 km of the road has been reconstructed and fully completed, with another 10 communal roads currently under construction. These are expected to be completed before the end of 2021, including the iconic Olaiya flyby. “

YOU MUST NOT MISS THESE NIGERIAN TRIBUNE TITLES

VERDICT: The claim that the water obtained from snails (snail slime) and spike milk can cure partial or complete stroke is false.

FULL STORY: On July 26, 2020, Facebook user Prince Nnamdi Enyinnaya Emelelu Eluwa claimed in an article that water obtained from snails (snail slime) and spike milk can cure an accident partial or complete cerebrovascular. The post, which is over a year old, was recently re-shared by other Facebook users.

Marburg virus: what you need to know about the disease recently detected in West Africa

On Monday August 9, 2021, the World Health Organization (WHO) confirmed the first case of Marburg virus in West Africa in Guinea. This development has sent shivers down the spines of West Africans who are still grappling with the effects of the coronavirus pandemic. But before this dreaded disease is greeted with rumors and misinformation, here’s what you need to know about the virus. APC says it’s creating a health emergency trust fund …

VERDICT: The assertion is false and misleading. The United States did not give the Nigerian federal government a 48-hour ultimatum to detain Abba Kyari.

FULL STORY: Tons of backlash have greeted the indictment of suspended Deputy Police Commissioner Abba Kyari by the United States District Court for the Central District of California.

The court indicted Kyari over his alleged involvement in the international scheme to defraud a Qatari school founder of more than $ 1 million. The fraud scheme was orchestrated by famous Instagram celebrity Ramon Abbas, also known as Hushpuppi.

The dangers of mixing toilet cleaner with bleach

A few weeks ago, Eniola Oyémolade, a journalist, decided to get creative by cleaning, mixing a toilet cleaner and bleach. She did it with the thought that if one product worked, mixing it with another would make it even better.

Unbeknownst to him, mixing bleach with a toilet cleaner creates a poisonous gas that can cause adverse health effects, including death.

“After the mixing I started to feel a burning sensation in my throat and had to leave the room because the smell was very bad too,” she said.