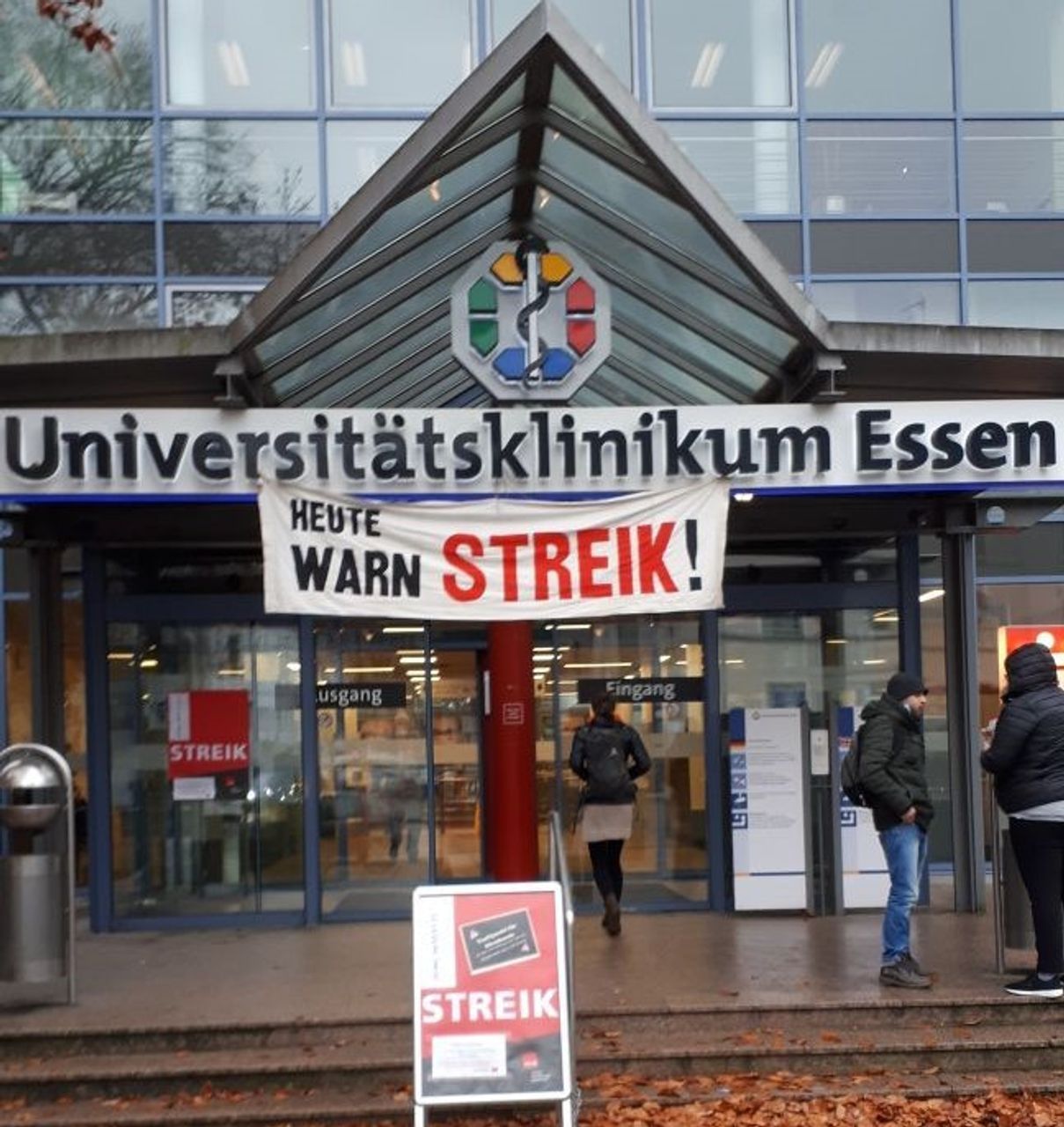 Nurses, educators and other officials are currently protesting and striking for better wages and working conditions across Germany.

Nurses at German university hospitals, which are directly subordinate to the country’s state governments, called a strike on Tuesday and Wednesday last week. The strike took place during negotiations for a new contract for public service workers. Nurses are among those who have made the biggest sacrifices in the twenty months of the COVID-19 pandemic.

In North Rhine-Westphalia, the university hospitals of Aachen, Bonn, DÃ¼sseldorf, Essen, Cologne and MÃ¼nster were affected by the strikes, and in Bavaria, the clinics of Munich, Augsburg, Erlangen, Regensburg and WÃ¼rzburg . In Berlin, it is mainly nursery school teachers and district council employees who are on strike. Workers in all spheres of state-owned enterprises, including hospitals, nursing homes, day care centers, schools, universities and welfare centers, are affected by the contractual conflict.

“Halloween is over – here the HORROR continues”, sarcastically painted strikers from Bonn University Hospital on their banner. The pandemic in particular has intensified that horror over the past two years. According to WHO estimates, up to 180,000 nurses worldwide have died from COVID-19. The number of people who have died in Germany is difficult to determine, with the figures carefully kept from the public.

â€œWhen the Corona pandemic started, I thought: this is the big bang now that we all have to finally make sure we are heard from,â€ nurse Lisa Schlagheck, 29, said in an interview with WDR media. â€œBut in the end, nothing changed. A lot of my colleagues are quitting one after the other because they simply cannot continue.

There is now a shortage of at least 100,000 nurses in German hospitals, and more nurses are suffering from burnout, under conditions of skyrocketing infection rates. Last week alone, five in 100,000 of the population were hospitalized with COVID-19. More than 3,000 coronavirus patients are currently in intensive care units.

At the same time, heads of state and their finance ministers are determined to step up the pressure on nurses. The heavily indebted state coffers must be reduced to the detriment of the workforce. At the end of a second round of negotiations on November 1 and 2, the state employers’ organization (Tarifgemeinschaft der LÃ¤nder, TdL) has still not submitted an offer.

The negotiations are led by Reinhold Hilbers (Christian Democratic Union, CDU), Finance Minister of Lower Saxony, and Andreas Dressel (Social Democratic Party, SPD), Finance Senator from Hamburg. Hilbers told the business daily Handelsblatt that the States want “to quickly return to a balanced budget without debt” and that this will only succeed “with structural savings”.

â€œPersonnel costs, which account for 40 to 50 percent of our total costs, have to take some of the burden,â€ Hilbers said.

State governments also know that the new federal government intends to step up the policies of the outgoing grand coalition (CDU / CSU plus SPD). Amid the devastating fourth wave of COVID-19 in the country, the SPD, Free Democratic Party and Greens ‘traffic light’ coalition ended the ‘national epidemic emergency’ on November 25. The coalition also spoke out against easing the current “debt brake” and against increasing taxes for the rich. In addition, the new government wants to provide more money to the German military, even exceeding NATO’s demand by 2% of GDP.

In the meantime, for public service personnel, whether they are considered â€œessentialâ€ or not, there is nothing left. Workers in hospitals and intensive care units, retirement and care homes, day care centers, schools, psychiatric wards and other institutions should continue to work hard until exhaustion. They are facing further staff cuts and a massive reduction in real wages with inflation already at 5% and rising.

Workers therefore have every right to fight against these inhumane policies. Much depends on the current wage struggle. Nationally, 1.1 million government employees, including 850,000 full-time positions, are affected. In addition, there are 1.4 million civil servants and one million retirees whose salaries and pensions are based on the ToL. The TdL also sets the parameters for the TVÃ¶D (Civil Service Workers Contract), which regulates wages and conditions in federal and municipal public services and is renegotiated one year after the TdL.

The fight for contracts is doomed to failure, however, if it is left in the hands of Verdi, the main civil service union and the other unions involved. All unions support the policy of profits before government life, and they conduct all contract negotiations as a well-honed ritual aimed above all at preventing any real struggle of the working class.

Neither Verdi and the German Federation of Civil Servants (dbb), which are leading the negotiations in Potsdam, nor the GEW (teachers’ union), IG BAU (construction workers) or the GdP (police union), all of whom are involved in the negotiations, questioning the government’s austerity policies. On the contrary, they put them into practice daily in the workplace. Just two months ago, Verdi called off month-long strikes at Berlin’s CharitÃ© and Vivantes public hospitals.

Verdi’s national executive is closely linked, via the SPD and green politicians, to the German business community and the new â€œtraffic lightâ€ government. Frank Werneke (SPD), the boss of Verdi, was proposed a few days ago to the supervisory board of Deutsche Bank, to succeed Frank Bsirske, the former boss of Verdi. The latter is leaving Deutsche Bank to take up a Green mandate in the German parliament.

In an interview with Deutschlandfunk, Werneke described the federal government’s pandemic aid to banks and businesses as “important and necessary.” In the same interview, he clarified that the wage demands formulated by the union had no real content. Verdi had defined them as a “signal,” Werneke said: “Let’s see if employers cross that bridge next.”

GEW President Maike Finnern has been advocating for months for schools to remain open, regardless of rising infection rates. The main politicians at the forefront of the campaign to open schools are prominent members of Verdi. These include Sandra Scheeres (SPD), Senator for Education in Berlin, and Britta Ernst, Minister for Education of Brandenburg, wife of Chancellor-designate Olaf Scholz and President of the Conference of Ministers of Education. Neither politician has been challenged by Verdi’s national executive for their policies, let alone kicked out of the union.

The decision 16 years ago to divide public sector workers into different bargaining rounds with a multitude of different contracts only served to divide the working class. Each sector conducts its own round of contract negotiations for its own collective agreement with its own isolated and demoralizing “warning strikes” armed with whistles provided free of charge by the union. Hospital staff fight separately from home care workers, airport workers separately from bus and tram drivers, and separately from postal delivery men, train drivers or garbage collection workers. Yet they are all organized into Verdi – an ingenious divide and rule system!

This alone shows that unions are leading workers by the nose. Officially, the unions are asking for a 5% salary increase for 12 months, or at least 150 euros more per month – in the health sector at least 300 euros more. In addition, the union is asking for a miserable increase of 100 euros per month for apprentices, while student assistants are to be given their own contracts.

Three years ago, when their demands were a little higher at 6 percent, the same union officials ended up agreeing to a 33-month contract. Pay increases were then on average less than 3% per year and working conditions during the pandemic have deteriorated considerably since then.

The point is that Verdi, GEW, IG Bau and dbb have so far ensured that public workers bear the consequences of the lethal contagion policy, both at work, through increased workload and wage dumping, and personally, through infection, disease and death. If these highly paid bureaucrats are allowed to continue, they will now make workers pay the costs resulting from official COVID-19 policy.

It is time for public sector workers to start organizing independently from unions. The Socialist Equality Party (SGP) calls for independent grassroots action committees, corresponding to those set up in Germany by teachers and bus drivers, and internationally by workers in the automobile and healthcare workers. These action committees will unify the working class in a united, international mass movement aimed at abolishing the capitalist profit system.

Sign up for the WSWS newsletter for healthcare workers!

After pandemic economy slows, Georgia buyers venture out for small businesses on Saturday