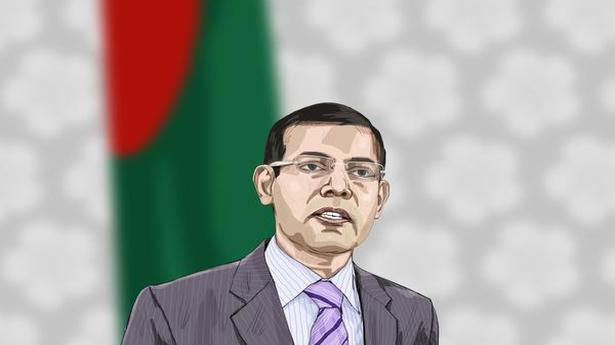 Mohamed nasheed, Speaker of Parliament and former Speaker of the Maldives, who survived an explosion right outside his residence in the capital MalÃ© on May 6, has returned to the country after receiving medical treatment abroad for serious injuries. He spoke about the lingering threat of religious extremism, his political plans amid differences with President Ibrahim Mohamed Solih, Maldives-India relations and the upcoming COP 26 summit where he will strongly advocate for vulnerable countries. to the climate. Extracts:

You swore to come back stronger. How do you feel now ?

I feel much better. I am very fortunate to be back home. Of course, careful. The government is investigating. They have already indicted a dozen people. But the investigation is not yet over. We hope that we can find all the perpetrators, including those who may have plotted it, financed it or had other links to terrorism. We hope to be able to find the culprits.

Are you concerned about your safety?

Well, yeah, my security details just got bigger and bigger. Of course, I am very concerned for my safety. But we must all lead normal lives and ensure that our way of life is defended and to continue the work entrusted to us by our people. I hope to continue doing this for as long as I can.

You openly criticized the government’s response to religious extremism and called on President Ibrahim Mohamed Solih to “put things right before it is too late”. Did it happen?

The government is trying to see if it can get to a place where safety and security becomes the most important issue; where terrorism is not tolerated at all. And any act or mission to encourage terrorism is also prohibited by law. I think the government will find ways and means to correct its trajectory and to see that it maintains the CDM [Maldivian Democratic Party] progressive development policies and ensuring that the people of the country lead a prosperous life. I am convinced that the government will be able to do this with the parliament and with the other political parties.

You seem more optimistic than in July. What has changed during this time?

Well, I’m back. So now I can have discussions and conversations with people on the ground. I think we all understand where we are. I think we are all very clear on what will happen if we do not manage to find amicable solutions. I believe we should all have the best interests of the country first, the best interests of our people first. So I think it is possible for us to resolve the differences and move forward.

You lobbied to move from the current presidential regime to a parliamentary system, while indicating that you could run for the presidential primaries of the MDP. Which of these events do you realistically see happening first?

We had the new Constitution in 2008. And this Constitution created two centers of power. Much of the Constitution was written largely for some form of parliamentary government. But at the very last stage, the president [Maumoon Abdul] Gayoom, decided to hold a referendum and prescribe a presidential form of government. We have been managing this Constitution for 12, 13 years now, and it is obvious that it contains contradictions. What I am suggesting is a way in which we can share power with Parliament and the Executive. And to see that there are not two centers of power. And this governance is streamlined and fluid.

I will have discussions with the president. The President suggested that we have these discussions and see how we can come to an amicable solution and where we can make constitutional changes. I think it should go ahead.

So you keep all options open as to your own future political steps?

I do not think about my political steps in the future. So much has happened, I have done so much. And there is still a long way to go. But I think we are on a very sustainable trajectory. Governance is increasingly improving in the Maldives. I believe that once the foundations have been laid, it is not so much a question of my political future, but of the political future of this country.

Well, sections of political society in the Maldives have always believed that xenophobic ideas would gain them by being accepted by the population. The CDM never had this point of view. We still don’t have that.

Our employees ask a fundamental question: How do we ensure the safety and security of our employees? What’s the best way to do it? Is it better to stay neutral in the Indian Ocean? Or should we take sides. We have clearly taken sides. We have decided that our foreign policy should be “India first”. And we have very similar economic and development programs with India.

I think we all have to work and see that foreign policy decisions and policies are bipartisan and accepted by all political groups. I will not stop my conversation with the opposition in this regard. And as I keep telling the president [Abdulla] Yameen and the PPM [Progressive Party of Maldives], “drop that, drop these xenophobic ideas”. And let’s try to build a progressive Maldives and Indian Ocean. I think the vast majority of Maldives understand this very simple problem.

Speaking of foreign policy, you commented on Afghanistan in a recent TV interview, where you called on India to be much more active, observing that it was â€œwishful thinkingâ€ that the Taliban would be different this time around. You wanted the international community to strengthen political pluralism in this country. Many countries, including India, have since contacted the Taliban administration. How do you read that, because you had a very strong vision of the developments in Afghanistan?

Well we’ve all started to see how the situation is going. It is now necessary for many countries to have a conversation with the Taliban. And when you have to do that, you have to do that. Exporting a narrow ideology would not benefit any of us. And anyone who engages with the government in Afghanistan, we hope, will convey to the Afghan government the need to contain the export of violent ideas and ideologies.

You are heading to the COP 26 summit in Glasgow. You called for urgent debt restructuring of climate-vulnerable countries. Are you expecting good news?

Of the 48 CVF [Climate Vulnerable Forum] countries, a number of countries are already paying 20% â€‹â€‹of our budget for debt repayment and 30% for adaptation. The first impact of climate change, the very rapid impact of climate change, would be debt default by country after country. All vulnerable countries will default on their debt. It wouldn’t be in anyone’s best interests. If you don’t have a Maldives, the Maldives can’t pay off their debt.

I am waiting for good news. I hope that the COP Presidency will understand that these 48 countries have had their internal discussions, regional discussions, and we will go to the COP with a singular point of view. And this singular vision would most certainly include debt restructuring.

Which blockchain is the most decentralized? Expert response