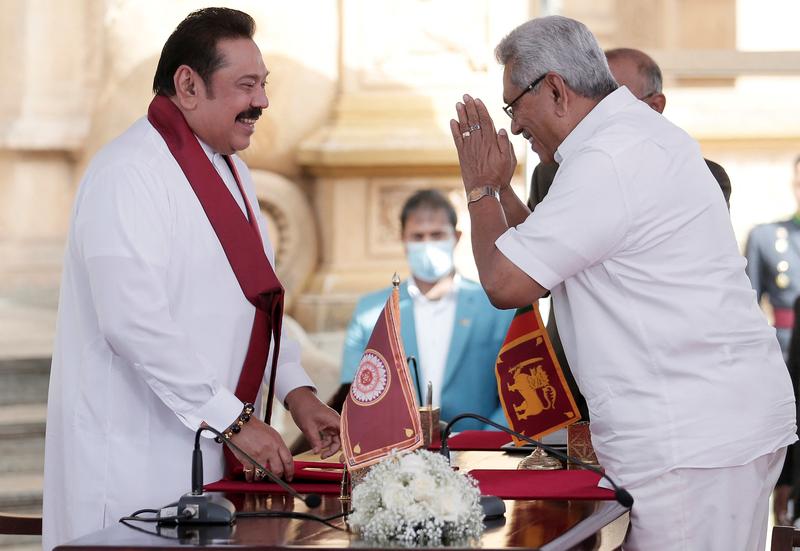 COLOMBO (Reuters) – It was the moment when two brothers who had dominated Sri Lankan politics for nearly 20 years finally went their separate ways.

On May 9, when a crowd of ruling party supporters marched towards activists protesting a crippling economic crisis, President Gotabaya Rajapaksa ordered police to arrest the pro-government crowd, fearing violence.

“He was shouting at the police to disperse the crowd,” said former media minister Nalaka Godahewa, who said he was with the president at the time.

Despite the president’s order, protests against inflation, power outages and shortages of basic necessities have turned deadly. Nine people were killed, hundreds were injured and the property of Rajapaksa loyalists was attacked.

The violence marked a turning point in the crisis. Gotabaya’s older brother, Prime Minister Mahinda Rajapaksa, had addressed government supporters earlier in the day. He was sitting down to lunch when he was shown a video of the violence by an aide, according to a source with direct knowledge of the events at the prime minister’s home in the commercial capital Colombo.

“He knew what he would do next,” the source said.

The 76-year-old, one of Sri Lanka’s most popular politicians in his prime, finished his meal and took a nap, the source said. At 5:02 p.m., he announced his resignation as prime minister, publicizing a rift within Sri Lanka’s ruling dynasty.

The source, who spoke on condition of anonymity to avoid reprisals, said the president had already pushed the prime minister to resign since early April as a concession to protesters demanding the ousting of the two men due to their response to the economic crisis enveloping the island. .

“GR (had) told MR to leave,” said another source close to the family, who also requested anonymity, referring to the president and prime minister by their initials.

Neither Mahinda Rajapaksa nor the president responded to requests for comment on this story. They haven’t said anything publicly about their differences.

After resigning, Mahinda hid at a naval base and remained under the protection of the armed forces for several days due to the anger of protesters. Gotabaya, 72, remains president, deeply unpopular with many Sri Lankans, as political leaders discuss a decision to cut executive powers from his office.

But the Rajapaksas are not over yet.

A third brother, Basil, wields considerable influence in the country via his grip on the ruling party that dominates parliament, according to at least five people who spoke to Reuters, including Godahewa and two other former ministers.

The new prime minister, Ranil Wickremesinghe, is heavily dependent in parliament on the ruling Sri Lanka Podujana Peramuna (SLPP) party to pass an interim budget within weeks that will outline measures to restore public finances. He also proposed reforms to limit the powers of the president and strengthen parliament in response to protesters’ demands.

The International Monetary Fund wants proof of reforms before accepting a bailout, for which negotiations are underway. Sri Lanka also needs an agreement with bondholders and bilateral creditors to restructure its debt and regain access to global financial markets.

Wickremesinghe belongs to a party that controls only one seat in parliament, while the SLPP and its coalition partners have a comfortable majority in the 225-seat legislature.

The five sources said the ruling party remains first and foremost loyal to Basil, 71, who helped rebuild it when the Rajapaksas surprisingly lost power in a presidential election in 2015. One of the sources, close de Basile, said the former finance minister would support the president, his older brother, but not at the expense of the party.

Events in Sri Lanka are being closely watched in neighboring India, South Asia’s regional heavyweight, and China, which has invested billions of dollars in infrastructure projects over the past decade in as part of its Belt and Road initiative that connects it to the rest of the world.

Political scientist Jayadeva Uyangoda said Wickremesinghe had to strike a balance to meet the demands of protesters and Sri Lanka’s international creditors, while accommodating the ruling party with an agenda Basil would accept.

“What Basil Rajapaksa wants will be what Parliament approves,” Uyangoda said.

Basil, who has not spoken publicly since resigning in early April along with the rest of the cabinet, did not respond to requests for comment.

Of the nine Rajapaksa siblings, Mahinda, Gotabaya and Basil once formed a tight-knit political unit.

Mahinda, a trained lawyer, became Sri Lanka’s youngest lawmaker when he entered parliament in 1970. In 2004, using a combination of political charisma and cunning, he became prime minister. The following year, he was elected president.

The brothers’ popularity skyrocketed after Mahinda and Gotabaya, a retired infantry officer appointed as Defense Secretary, crushed a decades-long Tamil insurgency in the north and east of the country in a brutal government offensive in 2009.

Mahinda won a landslide re-election in 2010, promising to heal the country’s deep divisions. It also brought Sri Lanka closer to China, inviting heavy investment like the $1.4 billion Port of Hambantota that angered India, which feared losing influence over its southern neighbour.

Then, in 2015, a shock defeat by Mahinda in the presidential elections threw the Rajapaksas into disarray.

Basil, a US-Sri Lankan dual citizen who served as an adviser to Mahinda for a long time while he was president, was instrumental in transforming a small political party into the SLPP in 2016, which made him the dominant player in Sri Lankan politics.

In 2019, suicide bombings coordinated by Islamist militants that killed more than 250 people offered the Rajapaksas an opening to return to power.

With Basil unwilling to give up his US citizenship and Mahinda barred from running due to term limits, Gotabaya ran for president and won by a landslide.

Mahinda was appointed prime minister soon after and Basil became finance minister in 2021, but things had started to go downhill.

The beginning of Sri Lanka’s slide into economic chaos dates back to 2019, when the Rajapaksas implemented populist tax cuts soon after returning to power, ignoring criticism from some advisers.

Godahewa, the former minister, said he had informed Gotabaya that the cuts would be a “disaster” due to the already precarious state of public finances, but that it had been reversed.

Government officials have previously said the tax cuts are aimed at reviving the economy by putting more money in people’s hands.

Then the COVID-19 pandemic hit, decimating tourism and with it a vital source of foreign exchange. Remittances from foreign workers also fell.

A manifesto promising to shift to organic farming and phase out the use of chemical fertilizers over the next decade was abruptly implemented in May 2021 by the president, throwing the country’s agricultural sector into the dark. turmoil and leading to food shortages as crop yields declined.

By then, relations between Mahinda and Gotabaya had deteriorated, according to four of the sources.

The two brothers disagreed on the president’s fertilizer ban, but a move by the prime minister in 2021 to overturn the decision was blocked by Gotabaya staff, the source at the prime’s residence says. minister.

No such difference between the two has been previously reported.

Even when the country’s huge debt problems became apparent, the Rajapaksa dragged their feet before going to the IMF to seek financial assistance. A government official said earlier this year that Basil, then finance minister, wanted the local economy to shake off the effects of the pandemic before heading to the IMF.

Shortly after being named energy minister in August 2020, former Rajapaksa coalition partner Udaya Gammanpila began looking into the accounts of Ceylon Petroleum Corporation (CPC), the country’s largest state-owned company. country in terms of turnover, and said he was appalled by what he saw.

CPC was selling petroleum products at a huge discount to consumers and had racked up an estimated $4 billion bill with its suppliers, despite not having enough income to pay them off.

In October 2020, he said he warned at a cabinet meeting that the country was heading for a foreign exchange crisis and suggested restricting non-essential imports and an immediate free floating of the rupee to avoid a black market in rupees. currencies.

Gammanpila told Reuters he had also urged the Rajapaksas to seek IMF support as soon as possible. His suggestions were rebuffed, he said.

“We can handle the situation,” Gammanpila said quoting Mahinda. Gotabaya rarely asserted himself in cabinet meetings, according to Gammanpila and Godahewa.

But Gammanpila said his main opponent was Basil.

The two men clashed frequently, with arguments turning into shouting in at least five cabinet meetings, according to Gammanpila.

His description of the arguments over economic policy was corroborated by the source close to the family, who said Basil felt he knew what he was doing and was shouting objections.

“Other countries spent what they earned,” Gammanpila said. “We spent what we borrowed. That was the difference.